Brian Phillips
Jun 11, 2012
The “must read” list, like the making of books, never ends.  The Meditations of Marcus Aurelius hardly stands as a newcomer to that list, yet its place has been lifted by the recent translation from Scot and David Hicks.  Accessible, accurate, and consistent with the sense of Marcus, The Emperor’s Handbook provides inspiration and endless fodder for reflection. 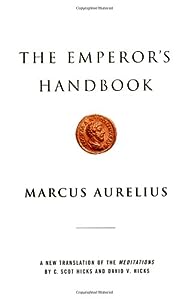 Marcus speaks of the valuable lessons and benefits gained from others – “Thanks to my great-grandfather, I didn’t have to waste my time in the public schools but had good tutors at home instead and learned that one cannot spend too much money on such things.”  From Rusticus, Marcus was taught “to read books for detailed understanding and not to settle for general summaries or accept uncritically the opinions of reviewers” (don’t take my word for it, read the book). The text proves particularly valuable for headmasters and other leaders, providing rich guidance for those who shepherd others, yet doing so in a way that addresses everyman. And, while Marcus’s seemingly contradictory advice is true – “You don’t have time to reread your diaries, or the lives of the ancient Greeks and Romans” – you ought to make time to read this one.  A short book, but not a quick read, The Emperor’s Handbook is a challenge and delight.  Don’t bother with the highlighters, you don’t have enough.