What Happens When a City Girl Reads Wendell Berry

Angelina Stanford
Jan 18, 2012
I am a bona fide city girl. I don’t like being outside. I don’t like animals. And I don’t want to know where my food comes from. As far as I am concerned the boneless skinless chicken breast is the ultimate expression of the triumph of modernity. At least that all used to be true of me. 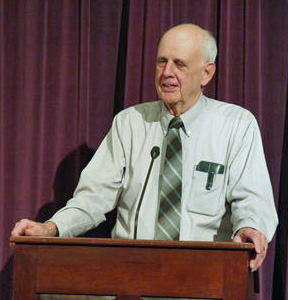 I am only one generation away from a line of farmers that stretch back to ancient times. That changed when my father moved to the city, became a professional and passed all of his disdain of rural life and its presumed intellectual backwardness to me. I was an excellent disciple. And yet, here I am, all these years later, daydreaming about living on a farm and plotting out my latest agrarian endeavor—raising live chickens. What happened? Wendell Berry happened. Over several years, I was exposed to people and ideas and events that slowly changed me.  And the name Wendell Berry kept popping up. Finally, after much cajoling, I overcame my severe case of reverse chronological snobbery and agreed to read a living author. I reluctantly opened the pages of the novel Jayber Crow and I was forever changed. It’s been many years since I entered that world, but I still remember how I felt.  I was overcome with a deep sense of longing and a sorrow for things I did not know that I had lost. I saw my grandparents in a new light and I felt ashamed that I had despised their rural ways. I mourned the loss of their connectedness to the land, the natural rhythm of their lives. I even mourned the death of all the small towns that disappeared when the interstate was completed when I was 12 years old. I wasn’t intellectually persuaded by Mr.Berry. Rather my heart was reordered. He helped me to love that which I had previously found unloveable. And I knew, on some deep level, that all of the trappings of modernity, that which I had held to be superior, were really the cause of all my feelings of isolation and alienation and fragmentation. At last I had discovered what my soul was missing. And I was faced with the great irony that my whole life I had been celebrating the death of the very things that were, in fact, life. I read more of Berry’s fiction after Jayber Crow and then I started exploring his non-fiction essays as well. I had never had an emotional experience reading an essay before.  Then I read “The Native Hill.” As I read this essay, I could feel my heart expanding and all the disparate fragments of my soul being pulled together, unified by a center that I didn’t even know existed, much less that I was missing it. He had moved me from the house of mourning to the house of healing. This July the CiRCE Institute will be honoring Wendell Berry at its annual conference. Do yourself a favor. Read some Berry to find out why. And don’t blame me if you find yourself wanting to buy live chickens. You’ve been warned.   (editor's note: coming soon - a "where to start with Wendell Berry" blog post)

Angelina Stanford has an MA in English literature from the University of Louisiana, graduating Phi Kappa Phi, and has taught in various Christian classical classrooms for over 20 years.  She is currently teaching the Great Books online to high school students at the Harvey Center for Family Learning and recently joined the online faculty of the Circe Academy.  She’s also the co-star of the popular Circe podcast “Close Reads.”  She has a particular interest in myths, fairy tales, and understanding literature through the study of mythological archetypes and biblical typologies—as well as a mild obsession with the influence of Celtic fairy stories and Celtic Christianity on the development of British literature.  She also has a more than mild obsession with Wendell Berry.​​

I also discovered Wendell Berry with the novel "Hannah Coulter". Now have read "Jayber Crow", "The Memory
of Old Jack", "That Distant Land"(Fidelity a must read of this collection), and just finished "Andy Catlett". This man definately changes your life - I am in search of a 'Port William"

I also felt great longing for more rural roots after first reading Wendell Berry 4-5 years ago. Thanks to his writing, I tend more to my home, my family, my neighborhood, my garden. I used to long for more adventure and travel. I do dream about chickens, some, but am not really a good animal person.

The essay "A Native Hill" can be found in The Art of the Commonplace.

The essay "A Native Hill' can be found in The Art of the Commonplace.

Trying to find it do - Can you point me in the right direction?

Wow! I should have proofread that. Yes, A Native HIll. Thanks for pointing that out.

You really should edit the post with the essay's correct name, no?

I had to laugh at this. Because of Wendell Berry, we have a fruit orchard, a flock of laying ducks, and two kinder goatlings that we hope to begin milking in the fall.

I used to want a cleaning lady, and then go out to eat so I could come home to a sterile kitchen! My, that man has an impact!

Love your comment. Sounds like me. The orchard, critters AND the cleaning lady would be ideal. Thank you. :)

No, I can't even imagine trying to run and listen to Wendell Berry. His whole style is one of serenity and a leisurely pace. He reminds me of how my grandparents lived. It was a far different lifestyle than my parents' but it attracted me with its concentration on simple things and nature. I grew up loving gardens because of my grandfather and making a beautiful home with next to nothing from my grandmother. Also, I will always love roses and holly trees and new lambs because of them. My life wouldn't be the same without their example to remember.

My schedule is so crazy right now that I'm clinging to "Hannah Coulter" as my little island of sanity and peace in a sea of busyness. We all needs islands like that in order to remain human, I think.

Trying to find the essay you mentioned - are you by chance referring to "A Native Hill"? No need to keep this comment in the stack.

Angelina,
Where would I find the essay that you mentioned? Is it in one of his larger collections? Thank you!

I'm at the beginning of reading Wendell Berry. I started a book of essays and last night I picked up "Hannah Coulter" and fell in love with it after the second chapter. I keep wanting to underline and share so many things that Mr. Berry is saying that agree with the things in my heart I already know to be true.

Oh, Hannah Coulter. What a beautiful book. Funny story. I like to listen to audio books while I exercise. I put Hannah Coulter on my ipod and then went for a run. I quickly discovered that you simply cannot cry and run at the same time!

Angelina,
I was wondering if you could tell me in which collection of essays I would find the one you spoke so highly of?
Thanks!!

Wendell Berry changed my life almost from top to bottom. It is incredibly soothing to find others discovering him as well. His essays are so wise I literally have to stop reading at times because I can't stand the pleasure and gravity of what I'm reading.

Would you mind if I reposted this piece on my blog at TeachThought.com?

I find myself doing the same thing. I have to stop, not just to absorb what he's saying but to reflect on the beauty of it. Man, can he write! Feel free to repost this. Thanks.

Love this. Reading Wendell Berry changed my life too. For me it started with the poem "The Mad Farmer Liberation Front."

We left our professional suburban lifestyle and returned to my rural roots. Now we operate a small organic farm and I read Wendell Berry whenever I can.

I love it! We also live on a small farm and reading Wendell Berry has always helped me know why it is all worth it. (It's a lot of work!)

When people ask how I, a suburbanite, came to live on two acres in the country with my family and raise a small flock of hens and talk of having more livestock, I say, "I read one too many books by Wendell Berry." Berry, along with others, taught me the value of a stable, inter-connected community, staying in place, and taking greater care of the world God has gifted us with.

It's his poetry that strikes me most deeply. Gems like this:

Geese appear high over us
pass, and the sky closes. Abandon,
as in love or sleep, holds
them to their way, clear
in the ancient faith: what we need
is here. And we pray, not
for new earth or heaven, but to be
quiet in heart, and in eye,
clear. What we need is here.

Many exposing our part in the organism around us, many expressing sorrow and longing, savoring our yearning to let go of the world of thought and relax again into the presence of our natural heritage. Some like "Sonata at Payne Hollow" expressing the beauty of lives well lived (Harlan and Anna Hubbard).

Berry had a similar affect on me that ultimately caused me to move back to my hometown of Lincoln, NE. Jayber Crow was my first book of his and remains my favorite (and the best place to begin, in my opinion). Hannah Coulter, Fidelity, and Remembering are all favorites as well. (The couple who did our premarital counseling actually had us read Hannah Coulter as part of the counseling.) What Are People For? and Sex, Economy, Freedom and Community are my favorite essay collections, although Life is a Miracle and Art of the Commonplace are extraordinary as well.